Why I chose each track on my debut album Body Is A Wonderland

This is an amazing song and the second verse is one of the sexiest I’ve ever heard! I learned to play it to someone I love and it’s been in my heart ever since. I’ve played it a few times publicly and I’m really pleased with my take on it!

I have really early memories of this song. I’m a big fan of Robert Palmer and this song represents my ethos in life. It’s an inclusive song that represents the struggle everyone has every day to say what they mean and mean what they say. I just love this song.

I’ve always been a big Barry White fan – I used to do singing impressions of him for friends for a laugh but this song always struck me as underrated. It’s a big musical production on the original so the words get a little lost which is a shame. I’ve always played it slower and acoustically so that you can appreciate the love in the song.

This song is pure joy. My brother played it at my eldest son’s christening and at one of our friend’s wedding. It’s so uplifting, positive and really fun to play. It’s just one of those great songs that lifts your soul and is a favorite of so many people.

Let My Love Be Your Shelter

This is such a great song written by Simon, who has been my MD and coach through the recording of this album. One of only two originals on the album it is a cracking song that I hope will touch a lot of people. It’s about being there for the people you love.

Such a beautiful song – but then pretty much everything Joni Mitchell did was. It’s a Christmas song without the schmaltz, and is about love and how it can be a tough time when you’ve split or pushed someone away and then realised your mistake.

It’s actually a song I have loved and played since I was 16. Who doesn’t love Nat King Cole? And it just makes you smile and believe tomorrow’s another day no matter what’s got to you today. I also sang this to my auntie Shiela in Mountain Ashe golf club on her 80th birthday!

To Make You Feel My Love

The Adele version is probably best known, but if course it was originally a Bob Dylan track. This was the first song I performed for Universal, so it was this song that convinced us all that we should make an album! When recording this track, we put down three versions of this song but in the end went back to the first recording, which was at a tough time for me and despite it being not my most pitch perfect effort, it was full of real emotion.

Waiting For The Love Of My Life

This is a beautiful song from a wonderful song writer deep in the heart of Wales. Amy co-wrote thinking out loud with Ed Sheeran and have to say this song that she’s given to me is just so romantic and lovely. Massive thanks to Amy!

Where Do The Children Play

This is another track I’ve played all my life! I’m a huge fan of Cat Stevens. The original was quite slow and I’ve always played this in an upbeat way as it is on the album. I think the message in the song is even more relevant today than when it came out 40 years ago in the 1970’s.

I love this song because whilst the world can be a terrible place it is also magical in so many ways. As the song says not only physically and I’ve been lucky enough to travel and see so many natural wonders but people can be awe inspiring and inspirational and the strength of human spirit never fails to amaze me.
I believe in people and I believe we can and will work out the solutions to so many challenges the world faces. It all starts with ourselves and then reaching out to help one other – from there things expand exponentially.

Nick Knowles to release debut album – ‘Every Kind of People’

Nick Knowles has signed to UMC/Universal Music, to release his debut album, ‘Every Kind of People’, on November 3rd 2017.

The perfect winter soundtrack, Nick’s rich timbre and beautiful songs, lends itself to crisp dark nights and roaring fires. Each track deeply personal to him, Nick has put his unique spin on his favourite songs from artists including Robert Palmer, John Mayer, Joni Mitchell and The Beatles.

The much-loved TV presenter learnt to play the guitar when he was just 14-years-old and music has always been a huge passion in Nick’s life. So much so, that he very nearly signed a record deal when he was younger but decided to concentrate on television presenting, opting instead to play his music privately or occasionally joining his musician brother on stage at his gigs.

It was at one of these intimate performances earlier this year that a music executive heard him sing ‘Make Me Feel My Love’. Spotting his natural talent, they insisted on introducing him to an A&R contact and 20 years after he was first spotted, Nick signed to UMC/Universal Music.

Nick explained: “Music has always been a major part of my life since I picked up a guitar when I was 14 but it’s always been a private thing. I’ve turned up at gigs without anybody knowing and plugged in my guitar. Weirdly when I’m away filming with the BBC, lots of the crew play guitars and we sing when we are in hotels rooms. I even found myself on the rooftop of a Soho hotel with Biffy Clyro after the NME Awards and ended up playing songs until 5 o’clock in the morning. We were playing everything from their tracks to will.i.am to John Denver. Music has always been there in the background I’ve just never had it out in the front.”

One of the UK’s highest rating TV presenters, Nick Knowles has 10 million people tuning in each week to watch his BBC primetime shows. With over 25 years’ experience on screen, Nick is best known for presenting ‘DIY SOS’, BBC1’s most watched and longest running prime time factual series.

But while he is instantly recognisable from screen, Nick kept his unique voice and impressive musical talents hidden from the public until now.

He explained: “I have a very different voice to pop, so it was important for me that this album had to come from me and was songs that I’ve played over the years. ‘Make You Feel My Love’ was the first song I performed for Universal, so it was this song that convinced us all that we should make an album. The Adele version is probably best known, but of course it was originally a Bob Dylan track. It had a deeper voice on it and it is full of real emotion.”

Following on from the huge success of Nick’s vegetarian and vegan cookbook, Proper Healthy Food, Nick has just finished writing his first novel.

Writing has long been a passion of Nick’s having penned scripts for TV and film. Nick says, “It felt like a natural progression from writing TV dramas and a feature film to writing my first novel.”

See here Fabulous Interview for Nick’s interview with Fabulous Magazine, where he talks celebrities and his passion for vegan food! DIY SOS has been working on one of its most ambitious and heartfelt projects to date to raise money for BBC Children in Need. Nick Knowles, DIY SOS presenter, and the ‘Purple Shirts’ team have begun transforming a Blackpool-based young carers centre from a run-down, neglected Victorian house, to a fun, safe and supportive environment where young carers are able to enjoy their childhood. The transformation will be documented in ‘DIY SOS: The Big Build BBC Children in Need special’ when the show airs in on BBC One on November 17th. 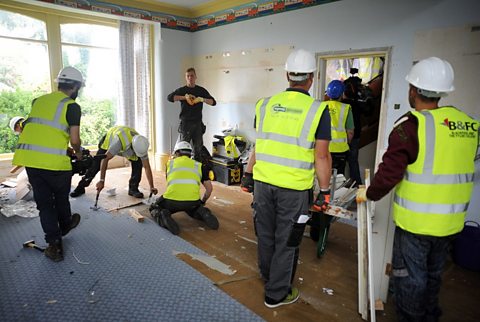 Joining the team for this special build is TV presenter, Laurence Llewelyn-Bowen, the homestyle consultant has designed the project, as well as over 250 local volunteers helping in any way they can. From bricklayers to plasterers, gardeners to tea-makers, the community has come together to donate their time, resources and materials for the good cause.

The property, Blenheim House, is owned by Blackpool Carers Centre, a charity which receives BBC Children in Need funding to provide out-of-school respite and training activities as well as peer support for over 100 children and young people with caring responsibilities. Nick has been nominated in the Best Presenter Category in this years National Television Awards with DIY SOS also receiving a nomination in the Best Factual Entertainment Category – click here to vote http://www.nationaltvawards.com/

Nick’s first cookbook is available to pre order now via Amazon Proper Healthy Food. A passion project following on from his stay at The Retreat (available to watch on BBC iplayer for a limited time only Watch The Retreat) Nick decided that in order to stay (mostly) vegan he would need to make sure his diet was hearty, healthy and interesting when he returned to the U.K this lead to his highly anticipated first book which promises to have recipes that meat lovers and vegans alike, will love. DIY SOS has been nominated for a TV Choice Award under the category ‘Best Lifestyle Show’ there’s no need to register and voting only takes a couple of minutes.

Please click on the link to place your vote – www.tvchoicemagazine.co.uk